The Legacy of Walter Chyzowych

To commemorate the 25th Anniversary of Walt Chyzowych’s sudden passing in September 1994, United Soccer Coaches recalls his vital role in forming our sport and propelling the quality of soccer in the United States during our modernizing era. 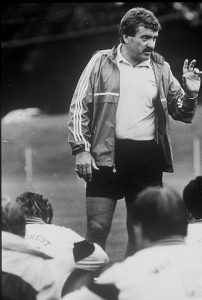 Walt’s service began in earnest when Dettmar Cramer identified him as the person to lead the professionalization of American soccer coaching. By educating, cultivating and endorsing managers through his work as Director of Coaching for US Soccer, Director of US Soccer’s Coaching Schools and as a popular United Soccer Coaches clinician, Walt helped elevate American soccer to a position we had not previously known in world soccer’s modern professional era.

During his tenure, Chyzowych championed Anson Dorrance’s selection as USWNT head coach in 1986; in 1989, the USA won Bronze at the inaugural FIFA Futsal World Cup, finished fourth at the FIFA Men’s U-20 World Cup; also in ‘89, after Walt identified Bob Gansler as the person to correct the USMNT’s qualifying course, we won our place in Italia ’90, the USA’s first FIFA World Cup in 40 years; and then US took Silver in the 1992 Futsal World Cup.[1]

Below, we survey Walt’s life in American soccer, and future articles in this three-part series will dive deeper into formative experiences of the person “whose contribution [to American soccer],” as Bob Gansler notes, “has been of such consequence, yet so diverse and substantial, that the total quantification is elusive.”

Born in Sambor Village, Ukraine in 1937, Chyzowych and his family knew the tragedies of World War II in a land and society contested between Soviet Communists and German National Socialists. Helen Chyzowych, with sons Ihor, Gene, and Walter Jr. braved a Displaced Persons Camp in occupied Germany before reuniting her family in Austria with her husband, Walter Sr. Continuing their journey to the United States from there, they entered America in Boston and were carried along the “Ukrainian network”, replanting their family’s roots in Philadelphia in 1949. 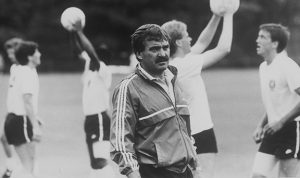 Walt soon joined the Ukrainian Nationals Juniors, the youth side of Philadelphia’s Ukrainian sport and social club, and at age 12 began his American soccer career playing up with boys as old as 18. Following high school, he scored 25 collegiate goals in 1959, setting a still-standing single season scoring record and earning First Team All-American honors at Temple University, earning his bachelor’s degree in 1961.

In 1961, Walt began the first of two coaching stints totaling 13 seasons at Philadelphia Textile College, leading the school to a 122-37-14 record and three NCAA Quarterfinal appearances. In 1966, with brother Eugene, friend Lenny Lucenko, and Pratt University Head Coach Wayne Sunderland, Walt began the All-American Soccer Camp and School, providing a rare immersive soccer experience for players and coaches alike. Attracting hundreds of players and coaches to sites in New York, All-American heralded both the rapid growth and the qualitative improvement of US soccer camps. 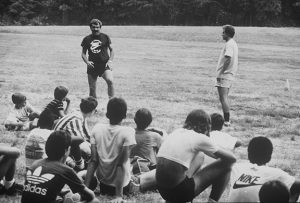 After the World Cup in 1970, Walt’s coaching destiny manifest itself when Dettmar Cramer conducted the first three United States Soccer Football Association[2] Coaching Schools. Presented in Providence, Rhode Island at the Moses Brown School, these one-week courses marked the beginning of professional coaching education in the United States. Walt attended the second week of the course, and his encounter with Cramer became an inflection point in modern American soccer. Nicknamed the “Football Professor”, Cramer revolutionized Japan’s coaching and quality in the 1960s and served as assistant to West German manager Helmut Schoen at England ‘66. Recognizing Walt’s playing skills, pedagogical abilities, and magnetic charisma, he invited Chyzowych to assist his establishment of the USSFA’s Coaching Schools.

For younger readers who grew up with youth soccer in the US, Walt likely taught one or more of your coaches. He worked alongside Cramer through 1974, and when Franz Beckenbauer coaxed Dettmar back to Germany as Bayern Munich manager early in 1975, Chyzowych became USSF Director of Coaching. For the next 15 years, he evolved and conducted the nationwide coaching courses that educated and trained the first generations of American coaches. 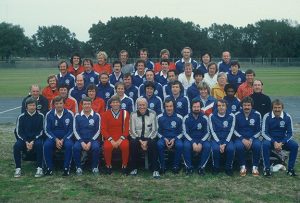 Because most Americans in the 70s and 80s other than soccer professionals grew up before US youth soccer began, and because we then had little access to professional and international soccer on TV or in print, the coaching schools’ importance in establishing a platform for improving US quality of play can hardly be overstated. Held each summer and winter, they attracted legions of candidates, including NASL coaches and players, providing the USA’s young soccer community with its first exposure to world class coaching methods and instruction. Cramer’s expertise and influence was pivotal, and Walt built on this by expanding his staff’s knowledge and instruction of global tactics and training through his Coaching School Staff Seminars. Held prior to the winter coaching schools, these seminars invited West Germany’s Helmut Schoen, Poland’s Jacek Gmoch, Yugoslavia’s Ivan Toplak, Heerenveen’s Hans Ooft, or Red Star Belgrade’s Svetislav Glišovi? to share their innovative international and club coaching approaches and to continue the USSF staff’s education.

Walt’s teaching, instruction, and mentorship reached an estimated 20,000 coaches, including most of the 650 “A” license recipients from 1971-1990, and throughout he maintained close relations with United Soccer Coaches, which preceded his time with the federation. In 1969, he led the Convention panel discussion, “Adjusting Offense to Defense & Vice Versa”, and thereafter appeared regularly as clinician, panel member and presenter at the Annual Convention. There were also many NSCAA-sponsored weekend clinics, such as the 1974 Clinic hosted by Tim Schum at SUNY Binghamton, where Walt, Gordon Bradley, Joe Machnik, and Graham Ramsey brought coaching education to growing soccer communities. And when the rigorous playing requirement necessary for advanced USSF coaching badges began excluding too many who could grow and nourish American soccer, two faithful instructors on Walt’s USSF staff, Dr. Tom Fleck and Jim Lennox, wrote the first curriculum for the NSCAA’s coaching courses. 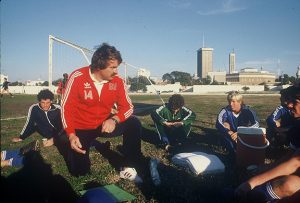 Walt also managed the National Team from 1976-1981, coaching the World Cup, Olympic, Pan American and National Youth Teams. It’s notable that in 1970, statistically zero children played soccer in the US and that the USSF budget and staff reflected its operation as a volunteer organization until 1990, yet with Walt’s leadership we qualified for the 1979 Pan American Games, 1980 Olympic Games and our Youth National Team qualified for the 1981 FIFA World Youth Championship.

Wake Forest University chose Walt to lead their men’s program in 1986, and by 1989 they rose from bottom of the table to ACC Champion, finishing that season ranked No. 4 nationally. Two months after USA ’94, Walt’s heart attacked him while playing tennis, and he passed away after just 57 years. The National Soccer Hall of Fame, along with United Soccer Coaches, Temple University, Philadelphia Textile, and the Wake Forest Sports Hall of Fame all include him in their rolls, and today the “Walt Chyzowych Wall of Fame” stands behind the north goal at W. Dennie Spry Stadium, Wake Forest’s soccer stadium.

During the 2020 United Soccer Coaches Convention in Baltimore, the Walt Chyzowych Fund Award Ceremony and Reception will honor Jill Ellis and Lincoln Phillips on Saturday, Jan. 18. This event is free and open to the public. To learn more, please visit WaltsLegacy.com or visit www.unitedsoccercoaches.org/coachesgive.