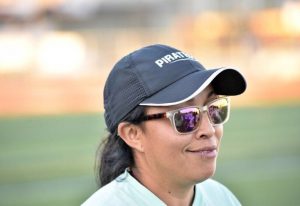 I began coaching about 15 years ago while I was still in high school. I started with local youth grassroot teams in San Leandro & San Lorenzo. After graduating from San Leandro High I attended and played for Chabot College where I continued to surround myself in the coaching environment by volunteering as an assistant coach for San Leandro High. After earning a scholarship to play for Lyon College in Arkansas, I focused on playing and learned so much from my coach Tyson John. After graduating from Lyon, I lived and played in Dallas, Texas before moving back to the Bay Area. I began coaching again by coaching a continuation school Co-ed indoor team and assisting at San Leandro High for one year before becoming the head coach of the Varsity/head of the soccer program. I coached at the high school for 6 years and coached both Jv and varsity together for the last 3 years. Coaching both teams took investing a great amount of time but the payoff was amazing. I have also coached for several clubs in the East Bay. The club that pushed me to think outside the box and took my coaching to the next level was Cal Magic. I was surrounded with brilliant soccer minds that made me see soccer in a different lens. I have taken things I have learned from my playing career, all the coaches I have worked with, coaching courses I have taken and have become not only a better coach but a person as well. All these experiences helped prepare me for my current position as a Technical Trainer for Girls Leading Girls, a club in San Francisco.

My biggest accomplishment off the field is being the first in my family to attend and graduate from high school and college. My mother immigrated to this country when I was an infant and was able to provide me with opportunities she never got to experience. Being able to go to attend college also helped me accomplish my dream of playing college soccer.

As a coach my biggest accomplishment was the progress the San Leandro High Girls Soccer team made during my time as Head Coach. When I first became head coach, the program was not competitive, no cuts at tryouts because of low numbers (had to keep everyone), and did not have the best team culture. With time and many lessons learned, the program made huge strides forward. Both Varsity and Jv are now able to compete with the best teams in the area, every player improves, Jv has won almost every game in the last two years, Varsity made playoffs for the first time in school history then made it again the following year, and Varsity took second in league in the 19-20 season. But what I am most proud of with both teams is how they played as a TEAM. We emphasize putting the team first always, loving the person next to you and supporting one another whether we win or lose. The team culture is what separates San Leandro High from any other program in the country. Two teams with 35-40 players total all support and lean on each other with little to no problems. Jv & Varsity were also close and had a great supportive relationship as well. They not only improved themselves, took the program to new heights but they also helped me become the coach I am today. I will forever be grateful for my time at San Leandro High School.

I have two role models. The first is my mother Norma Moreno. She came to the country when she was 22, didn’t know the language, didn’t have money but she never made excuses. She made sure I had everything I ever needed. When I played, she was my biggest fan. She would cheer so much and so loud that you could probably hear her a mile away. She made me feel like I could accomplish anything. My mom gave me the strength to persevere after she was deported in my senior year of college. It was the hardest thing I have ever faced and still face, but all the lessons she taught me, the sacrifices she made to get me to college and the strength I inherited from such a strong woman helped me finish the semester and become the first person in my family to earn a college degree. She did not get to witness me graduate but I like to imagine she would have been there cheering like she did from the sidelines. The diploma was for both of us.

My second role model is Raul Herrera. I call Raul my second dad but he was first introduced to my life as my club coach in high school. He is the best coach I have ever had. He taught me so much and always set the bar higher and higher. Most of the time we would not have a full 11 to play but we would still win games and tournaments because of his coaching. Any time that I have needed help, a place to stay or a place to feel at home, he was there. During summer breaks in college, he would train me 3 times a week to prepare for the season. I was in the best shape of my life but it didn’t come easy. Raul pushed me past my limits, made me fight for what I wanted but always encouraged me. Since being separated from my family for 8 years, he and his family have become my second family. They always open their doors to me and make me feel loved. Raul is also the person who pushed me to coach the high school team at the age of 23. I had a ton of doubt in myself but he saw the potential in me. I am so grateful that he pushed me to apply. I am such a better coach because of that experience and have learned more than I ever thought I could imagine. I will forever be grateful for the role he has played in my life.

Advice to younger coaches, especially female coaches, is to be patient and push yourself past your comfort zone. Just like becoming a great player takes time, the same goes for coaching. It will take time to develop your coaching skills but with time you will learn and improve. If I had stayed in my comfort zone I would have never gone to Arkansas to play soccer, never would have coached the San Leandro High teams and would not have learned all the lessons that have shaped me into the coach I am today.

Male coaches and club directors/athletic directors, hire more women coaches! Help players who are interested by guiding them in the right direction. When you do hire women make sure the coaches culture is inclusive and that they feel supported. Everything should be professional and female coaches deserve the same level of respect.

The beautiful game is beautiful because of how inclusive it is. Everyone around the world, no matter where they come from, can play this game. Soccer has the power to change lives and make dreams come true. It has the power to unite, give hope and empower. If you are interested in coaching, take a chance. You will never know where it can take you.

Please join us in celebrating Hispanic Heritage Month September 15th – October 15th, 2020 and throughout the year. If you would like more information about being a part of the United Soccer Coaches Latino Coaches Advocacy Group please email us. Latinocoaches@unitedsoccercoaches.org