Eight Student-Athletes Honored as College Players of the Week – October 6, 2021

Rutgers University graduate midfielder and MAC Herman Trophy candidate, Frankie Tagliaferri (Colts Neck, N.J.), scored her 100th career goal in her 100th career game played this past week. She scored the equalizer in the 2-1 win at Ohio State, helping RU move to 4-0-0 in Big Ten play. With 23 points on the season, she leads the conference in total points and leads the team with nine goals and five assists this season.

In men’s DI action, Duke sophomore forward Thorleifur Ulfarsson (Kopavogur, Iceland) recorded the single best two game goal scoring stretch of his career with five against Howard and Louisville. He tallied his second career hat trick in the win over Howard and converted a penalty kick against Louisville.

Emma Sexton (Fort Mill, S.C.) scored both goals as Lander upset #2 Flagler 2-1 and had three goals in two matches on the week. The first-year forward scored her first goal in a 3-2 win over Clayton State, then provided all the scoring as Lander handed Flagler their first loss of the NCAA DII season.

The men’s DII honor this week goes to Mount Olive sophomore forward, Alfie Pope (London, England). Pope opened last week by scoring a goal in the Trojan’s 3-1 home win over Shaw on Sept. 29. He followed that up by collecting a hat trick in Mount Olive’s come-from-behind home conference win over North Greenville on Oct. 2. With Mount Olive down 2-1 to North Greenville, Pope responded by scoring all three goals over a roughly 15-minute stretch. Pope leads all in Conference Carolinas with 10 goals in the 2021 fall campaign.

Grad forward Riley Cook (Mechanicsville, Va.) factored into all six goals scored by the fourth-ranked Christopher Newport Captains this week, including both game-winning goals. She notched sixth career hat trick with three goals against Virginia Wesleyan and added two goals and an assist against Sewanee, who came in with a 6-1-1 overall record. Cook has helped lead CNU to a program-record ninth straight win to start the season 9-0-0.

In men’s DIII soccer, senior midfielder Nilton de Andrade (Fogo, Cape Verde) was named LEC Offensive Player of the Week after tallying two goals and three assists in a 2-0-0 week for the Beacons. He opened the week scoring the game-winning goal in the 85th minute to give UMass Boston a 2-1 conference win at Southern Maine, and capped it off scoring one goal with three assists in an 8-0 rout of Marymount. The senior leads the LEC with 11 goals, 28 points and five game-winning goals, and ranks second with six assists.

The NJCAA award returns this week, with second-year forward Kelsey Johnson (North Ogden, Utah) amassing an incredible 21 points in three games. Her ten goals and one assist helped College of Lake County to a perfect 3-0-0 week.

First-year forward Andy Cabrera (Inglewood, Calif.) led the #4 ranked El Camino College to a perfect week. He had a hand in every goal scored by the Warriors last week, scoring two goals in a 2-0 win over Bakersfield on Tuesday and assisted on both goals in a 2-0 road win at Citrus on Friday. 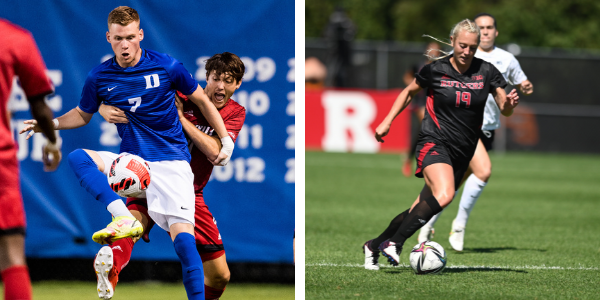