Sure, it’s unusual for a college coach to leave a Division I head job to become an assistant at another program.

It’s also unusual to move from Division I to Division II.

But Kat Mertz is not a typical coach.

After leading the University of Nevada-Las Vegas, Saint Louis and Oregon to nine NCAA tournaments, she became an assistant at the University of Oklahoma. She liked the head coach, and saw it as a great opportunity to learn more. 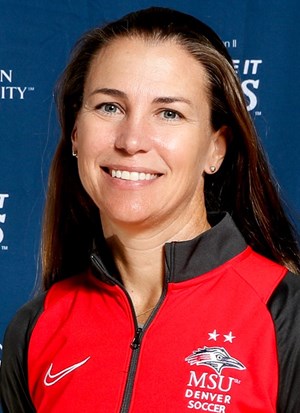 After COVID struck, Mertz and her wife realized the importance of spending time with their two young children, in an outdoor environment. When the chance came to coach Metropolitan State University in Denver, she grabbed it.

The first season last fall was like “drinking from a fire hose,” she says. She got used to new players, a new conference, and a new division (II). She learned about the “incredible” Denver soccer community. She was all in.

Mertz is used to challenges. She was part of the women’s U-20 national team staff in 2008, with the late Tony DiCicco, and the 2010 World Cup staff with Jill Ellis. She’s learned from them, and other top coaches like April Heinrichs and Chris Petrucelli.

She appreciates the chance, as a coach, to impact players. She and her staff talk often about the importance of lifetime relationships, making each other better, being present and enjoying the moment.

At whatever level – or wherever in the country – that moment is.