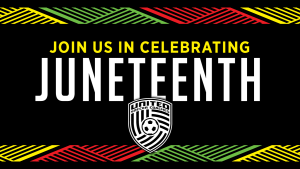 On June 19, 1865, word reached enslaved African Americans in Texas that they were free. Beginning the next year, celebrations on that date spread across the South. Today Juneteenth is recognized nationally. It is both a celebration of freedom, and a reminder that we must still fight to address systems and institutions that challenge the Black community.

Today – 155 years later – the United Soccer Coaches Black Coaches Advocacy Group honors Juneteenth by looking back at our own history and growth. Ted Chambers, a longtime member of the association, the first coach at Howard University and a United Soccer Coaches Honor Award Winner and member of the Hall of Fame, became a mentor to many. One of those coaches was Lincoln Phillips. The Trinidad and Tobago national team goalkeeper played professionally, became the first black head coach of a US pro team, and won two NCAA championships as Howard University’s coach.

He joined US Soccer’s national coaching technical staff in 1980, teaching A, B and C license courses and was a presenter at National Soccer Coaches Association of America conventions. In 1987, Lincoln called a meeting for all Black coaches, formed the Black Soccer Coaches of America, and became its first President. The group grew, adding more African American and Caribbean coaches each year.

In 1989 Mike Curry – also a high-level goalkeeper and coach – took over.

Several years ago, Nicole Hercules attended her first convention. A business owner, coach and advocate from Rochester, New York, she was inspired by Phillips and then-chair Daniel Gordon. “They lit a fire in the room that burns in me to this very day,” she recalls.

With former chair Kendall Reyes as mentor, she prepared to become the first female chair of what was now called United Soccer Coaches Black Coaches Advocacy Group. Inspired by those who preceded her, she picked up their torch and prepared to lead. Less than six months later, national events brought the realities of racism into every American home.

The Black Coaches Advocacy Group is well prepared to address those issues. With members representing North America, the Caribbean, South America, Europe and Africa, and a strategic plan for the near and long term, change is at hand.

The United Soccer Coaches Black Coaches Advocacy Group is a coalition. We lift each other up, work to advance Black men and women in our sport, build bridges for the generations that follow, and unify all soccer coaches across the world to do what is right for humanity.

We have created new content, created a mentorship program, and come together to impact inner-city youth. We work for policy changes, aligning with all soccer organizations, federations, international associations and soccer companies.

Our focus through the rest of this year is on zero tolerance for racism at every level, a professional development course with a path to opportunities for coaches and players, and we are pleased to be able to announce a new anti-racism resource page on the United Soccer Coaches website. Our hope is that this page will be a place for all members to find help when they are dealing with issues of racism. We would also encourage you to send us resources that you would like us to add. Click here to view resources!

Our history has helped us build a bridge that can carry all of us forward. We hope everyone will join us.

Happy Juneteenth to all!