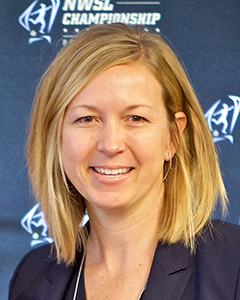 “We are proud to recognize Amanda Duffy with our 2019 Honorary All-America Award following a NWSL season that ranks among the most successful years for women’s professional soccer in the United States ever,” said Jeff Farnsworth, United Soccer Coaches President. “Her vision and leadership that she has built for the league from both an entertainment value and business model has been successful as we continue to celebrate the women’s game following the wonderful success of the U.S. Women’s National Team in France this past summer.”

As President of the NWSL, Duffy leads the execution of the league’s strategic vision, growth initiatives and day-to-day operations and has played an instrumental role in the success of the league’s evolution as the long-standing professional women’s soccer league in the United States. Under her leadership, the league has experienced continued growth in teams, game attendance, partnerships, digital engagement, and player relations. She spearheaded partnerships that include a national broadcast agreement with ESPN and a historic sponsorship with Budweiser that elevates the visibility and momentum across the professional sports landscape.

Prior to joining NWSL, Duffy was named President of Louisville City FC in December 2015, the first and only female president in the league. She started with the club in October 2014 as Vice President of Operations and was promoted to General Manager two months later.

She spent more than seven years moving up the ranks of the United Soccer League working in a number of roles – including strategic planning, league management, and league operations. She served as Director of Operations for USL PRO from 2007-10 before transitioning to Senior Director for the W-League, a position she held until 2014.

Duffy played collegiately at East Carolina, where she set single-season and career records for goals as well as the career record for points. She was inducted into the ECU Sports Hall of Fame in 2012. Following college, she played professionally in the W-League for three seasons and won a league championship in 2003 before playing in the Swedish 1st Division in 2006.

Each year, the United Soccer Coaches Honorary All-America Award is presented to a person or persons who have brought particular distinction and/or attention to the sport of soccer through their efforts within and beyond the boundaries of the sport. Among past recipients, the categories of persons recognized have included astronauts, entertainers, politicians, military personnel, administrators and other individuals connected to the game.