KANSAS CITY, Mo. (July 3, 2019) — Everyone associated with United Soccer Coaches and the greater soccer family mourns the loss of Charlie Slagle. His career in soccer began in the mid-1970s as an All-Southern Conference goalkeeper at Davidson College and continued all the way up until his passing on Tuesday, July 2. 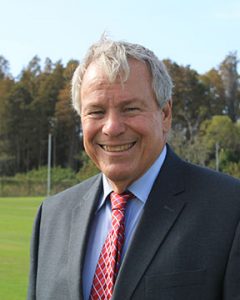 “Charlie was one of the true renaissance men of our game. Coach, executive, teacher, author, broadcaster, entrepreneur, but what he liked to call himself first and foremost was ‘Promoter’”, said United Soccer Coaches CEO Lynn Berling-Manuel. “He lived to Promote soccer with a capital “P”! The College Cups he hosted at Davidson College are still remembered as the most exciting events in virtually all of college soccer history, nothing ever surpassed them for true college soccer atmosphere. In my role as CEO of United Soccer Coaches, it was great to have a President that was also a CEO. He understood my pain! He was always positive and supportive. The legacy of his presidency was Open Training Week. It was his vision to have coaches helping coaches. He truly lived our brand of “uniting coaches around the love of the game.”

Slagle is the winningest coach in Davidson Wildcat history, amassing 209 wins over 21 seasons from 1980-2000. He led his 1992 squad to the national semifinals, which were hosted by Davidson. He was a seven-time SoCon Coach of the Year, two-time United Soccer Coaches Region Coach of the Year and was named the National Coach of the Year following the historic 1992 season. He was also largely responsible for bringing the College Cup to Davidson. In his roles at Davidson and with the Capital Area Soccer League (CASL), he hosted 14 NCAA Division I College Cups and hosted the last training camp for the U.S. Men’s National Team prior to the 2002 and 2006 FIFA World Cups.

He was most recently the Vice President of Community Engagement and Gameday Experience for the Richmond Kickers, a position he began in January of this year. He previously served as the CEO of Tampa Bay United Soccer Club starting in March 2016 and prior to that he was the Executive Director of the Colorado Rapids Youth Soccer Club in Denver, Colo. and CEO of the CASL in Raleigh, N.C. for more than 12 years.

“What a tremendous loss and a sad day for soccer with the passing of Charlie Slagle,” said United Soccer Coaches President Jeff Farnsworth. “Charlie was a leader, innovator, and a true friend. He touched so many at every level of soccer in this country. He will be so greatly missed.”

Slagle completed his six-year term on the United Soccer Coaches Board of Directors in January of 2019. He served as association President from January 2017-January 2018 and was integral in the development of Open Training Week, a nationwide initiative to provide opportunities for coaches from all levels to experience high-level training sessions and learn from one another, during his tenure as president.

A memorial service will be held at Davidson College Presbyterian Church (100 N. Main Street, Davidson, NC) at 3 p.m. on Sunday, July 28. A reception will follow in the Lilly Family Gallery, Chambers Building on the Davidson campus.

JP Dellacamera, FOX Soccer Broadcaster
“The Women’s World Cup was such a wonderful experience for me, but that was where I read the news about Charlie Slagle’s passing, which saddened me. Charlie and I go back to that 1990 World Cup Qualifier in Trinidad where he escorted Seamus Malin and I on to the field to do an on-camera open for ESPN. People were sitting in the aisles, blocking our path, but Charlie got us through. Charlie was a soccer promoter, did whatever he could to sell the beautiful game. The soccer world has lost a great contributor, and a great person.”

Lesle Gallimore, Past President, United Soccer Coaches
“Words are difficult at this time because I’m in such disbelief at Charlie’s passing. Not only was Charlie Slagle a fellow board member and college colleague, he was a friend. I’ll always remember him for his welcoming manner, his genuine respect for the game and the people in it. His love of coaching, teaching, and educating other coaches was a true passion and it showed. His “coaching tree” is as large and illustrious as his radio and coaching voice. My heart is broken for his children, friends, family and soccer family. I feel privileged to have followed in his United Soccer Coaches Presidents’ footsteps and to have shared a boardroom with him. Charlie’s presence will be missed but never forgotten, by me or all those who were fortunate enough to benefit from his life in any way.”

Andy Haile, At-Large Representative, United Soccer Coaches Board of Directors/Former Davidson Player
“I’m still recovering from the shock of the news about Charlie. You all can appreciate maybe more than anyone the respect and love for a coach who gives so much of himself to his team and his players. I had the great fortune to play for Charlie, but then the even greater luck to continue my friendship with him after my playing days were over. I’m thankful that we had the chance to reconnect and deepen that friendship on the (United Soccer Coaches) Board.”

Dean Linke, Soccer Broadcaster/Host of the United Soccer Coaches Podcast
“Charlie Slagle made promoting our great game his life’s work and we are all better for it – personally and professionally – having experienced the impact of his passion. He will be missed.”

Warren Mersereau, At-Large Representative, United Soccer Coaches Board of Directors
“Some of us knew Charlie as well as some of his players back to his Davidson days. And he always was creating ways to make soccer more fun, more accessible, more unifying, more community-building. To this day, what Charlie and Davidson did hosting the NCAA Men’s Championships has never been topped. He led the way in multiple ways and roles. May he Rest in Peace.”

Ralph Polson, Former Head Coach, Wofford College/United Soccer Coaches Past President
“My relationship with Charlie began over 30 years ago. Charlie was a mentor, and he was a foe on the field, but most importantly he was my friend. Charlie never met a stranger. His quick wit and dry sense of humor served him well.

He made a huge impact on our sport. He shared his time and talents with so many people and in so many areas of our game, and he did it with such energy and passion. I remember he reached out asking my advice on whether to run for the United Soccer Coaches Executive Committee. I knew with his love the game, his passion, and his vision, not only would he be a good candidate, but he could help shape the organization as it continued to evolve to better serve our diverse membership. I couldn’t have been more excited when he was elected.

He loved his kids and was tremendously proud of both Barry and Amelia. He loved his granddaughter, Clara. I am truly heartbroken to lose my good friend. The soccer community lost “one of the good guys.” RIP Charlie Slagle…Love ya, mean it!”

Matt Spear, Richmond Kickers Pro President and General Manager/Former Davidson Player
“We are stunned for the loss of a tremendous friend and person. Charlie was a force of nature who lived our “Joyful, Authentic, United” mission to the fullest. What was so powerful about Charlie is that he never met a stranger – he loved people and his energy was infectious. He made a massive community impact the past six months here in Richmond. Charlie deeply believed and activated that soccer was an inspiration and unifier. Charlie was a pivotal reason that I chose to attend Davidson, that I served our alma mater, and that I focus on servant leadership.”

Amanda Vandervort, United Soccer Coaches Past President
“My sincere condolences to Charlie’s friends and family, and players and coaches he inspired. He was a key part of the United Soccer Coaches leadership team for many years and my fellow Past President/Board member. Charlie Slagle always put the game first and his contributions to soccer in the U.S. can’t be understated.”

Bob Warming, Head Coach Nebraska-Omaha
“I’m heartbroken. I could never get enough Charlie Slagle, he was such a wonderful force of nature to be around. I’m grateful to have had his friendship for so long. It’s sad for all of us in soccer who loved him. It’s hard to think of him, even with weepy eyes, without smiling…that’s a life well lived.”