“I have been blessed to have had such a rewarding life in world football where I have had the opportunity to see the world, compete at the highest level and coach so many wonderful players,” Miguel said. 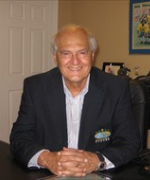 “Even more important though are the lifelong friendships I have made over the years. My years participating in United Soccer Coaches (formerly NSCAA) and connecting with friends and colleagues at the annual convention will always be special memories for me. I am humbled to have this Scholarship Fund established in my name and pleased that it will provide opportunities to deserving coaches to enjoy these same experiences.”

Miguel was born and grew up in the northeast of Brazil. After serving in the Brazilian Navy, Miguel moved to Rio de Janeiro to play for C.R. Vasco da Gama from 1955-to 1962. Miguel then went on to play for Deportivo Cali and Los Millionarios in Columbia and F.C. Koln in Germany where he became the first Brazilian goalkeeper to play for a top European club. Miguel returned to Brazil to play for Botafogo F.C and then moved to the USA to finish his career in the original North American Soccer League playing for the St. Louis Stars and New York Generals.

Miguel settled in St. Louis and became one of the first full time goalkeeper coaches at the college level when he joined the coaching staff at Saint Louis University working for head coach, Harry Keough, from 1972-1979.

Miguel furthered his career as the New York Cosmos goalkeeper coach and head scout from 1979-1984. The Cosmos won two NASL championships in that period. Miguel then returned to his hometown of Natal in Brazil where he coached and helped manage America R.N.

Other highlights of Miguel’s career include working on Pele’s staff analyzing the matches at the 1990 World Cup in Italy, serving as the goalkeeper coach for the Brazilian Masters National Team and being a member of United Soccer Coaches (formerly NSCAA).

Miguel has spent his later years taking hundreds of players, teams and coaches to Brazil for training, games and education, bringing top Brazilian clubs to play in the Dallas Cup Supergroup competition and lending support and expertise to the soccer community in his current hometown of Pensacola, Florida.