Katie McClure of Kansas Named Player of the Week 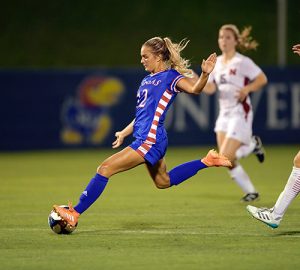 KANSAS CITY, Mo. (Aug. 27, 2019) – Kansas senior forward Katie McClure (Wichita, Kan.) has been named the United Soccer Coaches Division I Player of the Week for the first week of the 2019 season, the association announced on Tuesday.

McClure scored four goals, including two game-winners, and dished out two assists for 10 points as the Jayhawks went 2-0 to open the season. She had a hand in all four goals in the season-opening win over Nebraska, tallying her first career hat trick and adding an assist. Three days later she added another goal and assist in the win over Loyola-Chicago.

Each Tuesday during the college regular season, United Soccer Coaches selects a men’s and women’s Player of the Week for NCAA Division I, Division II, Division III and Junior College competition based on nominations from schools and conferences. Nominations are due every Tuesday by 10 a.m. CT to be considered.