Foundation Grants & Scholarships, Why Should You Apply? 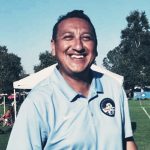 This past summer 2019, I was given the opportunity to attend the Premier Diploma in Denver, Colo. thanks to the Walt Chyzowych Fund and United Soccer Coaches Foundation. I completed the scholarship application process late in 2018 and was hoping to receive the support of the Foundation to continue my development as a soccer coach. I was grateful when I learned that I was chosen as one of the educational awardees, because without the support of the Foundation, I would not have been able to attend any course this year!

Regis University hosted the advanced diplomas this summer in a one-week residential program where we slept in the dorms, used their classrooms and sport fields, and enjoyed our time together at the dining hall. We not only ate at the dining hall, but we also spent many hours working on assignments there as well. 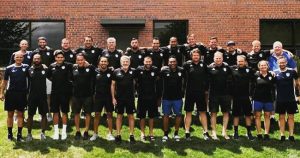 From the moment you get up for breakfast, you are kept on a busy schedule. If you want to spend time site-seeing or touring the city, I would recommend arriving a day early or staying late because you won’t have the time during the course. Whether in the classroom or on the field, the instruction was always great because of the quality of instructors facilitating the course. These instructors were very experienced and were always willing to provide any support we might’ve needed. Additionally, making new friends and growing my soccer network is always a benefit of attending these types of courses, especially when you stay in touch.

Why Did I Apply?
I am a south San Diego native that lives in a low-income, diverse, and underrepresented community that borders Mexico. Although soccer has always been a part of my life, I was usually a volunteer and I coached as a hobby on the side. From the moment I received my bachelor’s degree in Psychology in 2001 I began to work in the fields of Social Services and Mental Health. One of my main focuses working in these fields was always the community and improving the dynamics of families. There were many approaches and techniques used in working with families that I began to notice that paralleled with coaching.

Like most coaches, I began to take soccer coaching education classes because I wanted to be a better coach. I wanted to learn as much as I could to feel like I knew what I was talking about when coaching my players. Soon after, I began to realize that the coach was not the center of the game, I quickly learned that the game belonged to the players, so I wanted to continue to learn to better teach my players and improve their development.

As I continued to progress in my coaching education, I felt a change in my mindset and perspective about my objective. Like I mentioned, I used to think that I took coaching education courses for my sake before realizing it was for the sake of the players. But my awareness continued to change. I felt that the more aware I became of my role as a soccer coach, the more I began to think that I had a bigger impact than just on myself and my players. 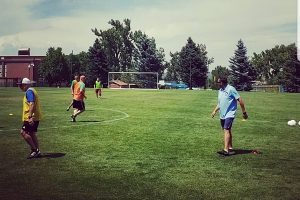 At this point I decided to take a step back and try to have a bird’s-eye view of how my role was progressing within the game. I noticed that I started to feel winning games was second to having people learn and enjoy the game. I felt at this moment that I was growing as a coach, not just to help my players play the game better, but I wanted to make an impact on the game as a whole. I began to advocate for the integrity of the game, fairplay, and unity. Much like in the work I did with youth and families, I didn’t just want to help support the change in the person I was working with, but I wanted to make an impact on the system as a whole.

After 17 years of working in Social Services and Mental Health as an advocate, counselor, and educator, after taking my license courses and other soccer coaching education classes, and after having the opportunity to complete the Master’s Degree in Soccer Coaching Education through Ohio University, I decided to make a career change in 2018. This decision was not based on wages or titles, but it was based on following my passion for making a difference in my community through soccer.

I noticed that my passion was not just coaching and working on developing players and coaches, but it was also advocating for the game. We get to the point during our growth that we impact more than just the people around us. Our impact transcends many layers to the point where it hits to the core of the purpose of being a part of this game. 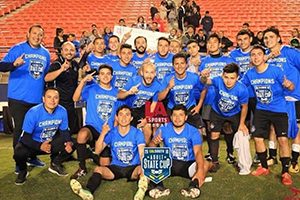 Soccer was here before us, and soccer will be here after us, but my concern is what are those people that are barely going to be a part of the game in the future going to say about how we took care of the game in the past or present. I personally don’t just want to be known as that great coach that won everything, I’d prefer to be known as that coach that enjoyed sharing the game and knowledge of it with everyone that crossed his path. We grow not just for ourselves, but to lead the way for others to follow. How do we expect the game to be looked after in the future if we don’t take care of it right now?

For me, attending the most advanced diploma offered by United Soccer Coaches, not only taught me how to be a better educator for players and other coaches, but it also reminded me about the responsibility we have as stewards of the game. I believe that to consider yourself at the pinnacle of your work in soccer, you not only have to be knowledgeable of the game but also understand the larger impact your role has on the community as a whole and how the community impacts the tapestry of our soccer culture.

Why You Should Apply
I would say, because it’s our responsibility to apply if we really want to make an impact not just on ourselves, our players, and the game, but for the sake of the entire community. Like I mentioned, financially I would not have had the possibility to attend any coaching course this year, but with the support of the Foundation, I was able to continue my growth which gives me credibility when working in the game, both with other soccer coaches and the families I serve in my community 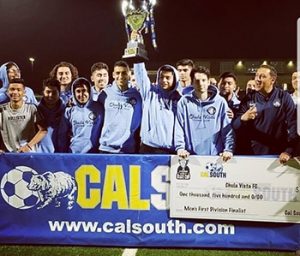 Could I just focus on becoming a better coach and take a course just for my sake? Of course I could, but I wouldn’t be doing myself, the players, other coaches, the game, or my community any favors. We have all won a championship or more, but how many of us can say that we collaborate and share our knowledge with others, that we created opportunities for people not involved in the game to learn more about it and create easier access to becoming a part of it, and no matter the result at the final whistle, do the smiles on their faces make it all worth it?

Although I grew up playing soccer and I’ve had the privilege of coaching all four of my daughters, there is nothing that fulfills me more and puts a bigger smile on my face than talking to others about the game and getting them so excited that they want to watch a game or learn more about it because of the passion they feel in me. I don’t care if they play for me, for my club, or anywhere else, I only care about their involvement in the game and how it impacts their lives positively both on and off the soccer field.

Because the game and your community needs you to. The investment in your coaching education will give you the best return in life, improving the game for all!

Apply for a Foundation Scholarship today, for a better game tomorrow! Complete your aplication at www.unitedsoccercoaches.org/coachesgive

Bio: Humberto holds a B.A. in Psychology, a USSF C License, and an M.S. in Soccer Coaching Education and practices his trade at Chula Vista FC where he currently coaches G2011, B2010, and the U20/U23 teams. He is currently completing his Premier Diploma and thanks the Walt Chyzowych Fund for the opportunity to attend the course and continue his work in stewarding the beautiful game we all love, soccer.