Five Honored with Letters of Commendation

KANSAS CITY, Mo. (Jan. 24, 2020) — Each year at the United Soccer Convention, the association recognizes a select few for their special contributions to the sport and to the United Soccer Coaches membership. This year, five long-time members were presented Letters of Commendation during the annual Awards Banquet.

The United Soccer Coaches Letter of Commendation is presented to someone for their service to, impact on, and positive influence on the association and/or the game of soccer in the United States. The five recipients were:

Bokhart has made tremendous contributions to the association, primarily through his service on the Awards Committee, serving as the Youth Boys and NAIA Men’s All-America Committees National Chair simultaneously for several years. He has also provided support to the Awards Committee during the annual Convention, serving as a member of the team that runs the Awards Room. A native of Fort Wayne, Ind., Bokhart is entering his ninth year with the Indiana Tech Athletics Department and is embarking on his second year as the full-time Associate Director of Athletics for Compliance and Administration in the 2019-20 year after spending seven years as the head men’s soccer coach.

Eissele served in several capacities with the association over his 25-year career as girls’ head coach at Lake Mary (Fla.) High School, primarily as the National Chair of the Winter Girls Rankings Committee for 17 years prior to his retirement from coaching in 2019. A member of the association since 1988, Eissele established the United Soccer Coaches Regional and goalkeeping courses in conjunction with the Florida Athletic Coaches Association. He also served as the chair of the Florida Girls All-America committee for 21 years and was a member of the state Coach of the Year selection committee for 19 years.

As a teacher, coach, administrator and officer, Kidd, the girls coach at Swansboro (N.C.) High School, has championed both high school soccer and its grassroots development to the fullest in North Carolina and the results are continually evident. The state is recognized regionally and nationally as a competitive state in high school soccer, and much of that has evolved with his guidance and diligence. Kidd has served the association for more than 20 years, first as High School Coach of the Year chair at the state level, then as a regional and now national chair for the High School Girls National Coach of the Year. He has been a United Soccer Coaches member since 1996.

Ralph Lundy recently retired after 44 years as a collegiate head coach, first at Erskine College in South Carolina for 11 years, then for 33 years at the College of Charleston. He amassed a career record of 453-348-66, placing him amongst the winningest all-time men’s college coaches at the NCAA Division I level. Lundy led the Cougars to 19 winning seasons in his tenure. Since the team’s transition from NAIA to NCAA Division I status in 1991, he led College of Charleston to five conference championships and five appearances in the NCAA Tournament.

Przemieniecki has served with distinction on the NCAA Division II Women’s All-America Committee for nearly 20 years, including the last 11 as National Chair. He is currently an Assistant Professor of Criminal Justice at West Chester University in Pennsylvania and a staff member with the Chester United Soccer Club. He previously served as assistant women’s coach at West Chester University for 2009-15 and was the head women’s coach at the University of Minnesota-Crookston from 2001 to 2008. He has been a United Soccer Coaches member since 1991. 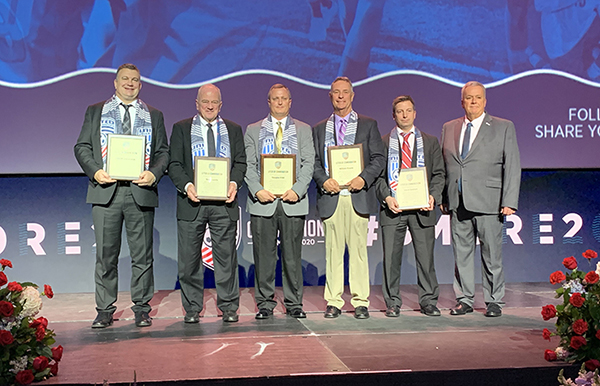