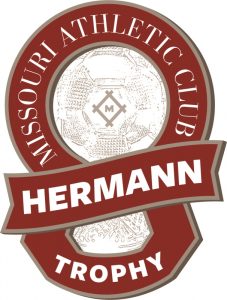 Leading this year’s watch list is University of New Hampshire junior midfielder Yannick Bright, the only 2021 Hermann semi-finalist returning to play this fall.

Hebbeker, Nagy, and Showunmi are all taking advantage of the NCAA decision granting an additional season of competition for student-athletes following the challenges of the Covid-19 pandemic during the 2020-21 academic year.

The Hermann Trophy, presented annually by the Missouri Athletic Club, is the nation’s highest individual honor recognizing the National Player of the Year as determined by the voting of Division I coaches who are members of United Soccer Coaches.

The 2022 Women’s Hermann Trophy Watch List was announced on Thursday, Aug. 18. Fifteen men’s players and 15 women’s players become Hermann Trophy semifinalists on Nov. 30 following completion of Division I All-America voting following the fall season. Then on Dec. 7, the top three players from a final round of voting are the 2021 finalists. The 2022 winner is revealed on Jan. 6, 2023, at a ceremony at the historic Missouri Athletic Club in St. Louis, Mo.

About the Missouri Athletic Club

Located in St. Louis, Mo., the Missouri Athletic Club has been presenting college soccer’s player of the year awards since 1986. The MAC was established in 1903 as an athletic, dining and social club. It has a “Platinum Club of America” status, which is awarded to the top private clubs in the country. To learn more about the Missouri Athletic Club, go to mac-stl.org.