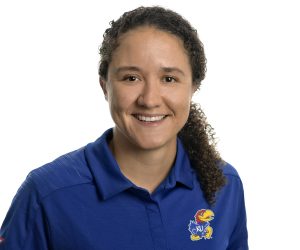 Laura Jackson joined the University of Kansas soccer staff in June of 2019. She brings a wealth of both coaching and playing experience after she spent the last two seasons on the Florida Atlantic coaching staff, while also attaining All-League status twice during her three seasons on the pitch (2010-12) at Iona.

Prior to going to Kansas, Jackson spent two highly successful years as an assistant coach for Florida Atlantic. She helped lead the Owls to a pair of impressive seasons that saw FAU reach the Conference USA tournament semifinals in both 2017 and 2018 as well as the C-USA regular-season title last season, the program’s first league championship since 2005.

A native of London, England, Jackson went to Boca Raton from the University of Idaho, where she spent four seasons on the coaching staff. She helped to lead the Vandals to back-to-back Big Sky regular-season titles in her last two years, which included an undefeated conference mark in 2015 (9-0-1), followed by the squad going 7-1-2 in 2016. Overall, Idaho was 24-9-7 during that span, and their 2015 record compared to the season prior was most improved in the NCAA.

Jackson has continued her own playing career, seeing time with Jamaica’s 26-person provisional squad for the 2019 FIFA Women’s World Cup. She notched international caps in Jamaica’s matches vs. Chile, South Africa and Panama.

Jackson began her collegiate playing career at Syracuse and finished at Iona, where she was twice named All-Metro Atlantic Athletic Conference and was team captain and a MAAC All-Tournament team member in 2012. She was also a student assistant at Iona before making the move to Idaho and has experience with both goalkeepers and field players. In 2016, she gained entry into United Soccer Coaches’ prestigious “30 Under 30” program, identifying the top young soccer coaches nationwide.

Prior to her collegiate playing career, Jackson was a member of the Watford club team in the English Premier League, as well as part of the Arsenal Youth Academy. In addition to her college coaching experience, she also coached club soccer with Moscow United, Quad City Fusion and Idaho Elite Soccer Academy.

Jackson earned her master’s degree in neuroscience from Idaho and is working towards her Ph.D. from the school in sports psychology, with a concentration on team and individual psychological performance. She received her undergraduate degree in biology from Iona, and twice while at Syracuse, made the athletic director’s honor roll.

She has earned an USSF C License as well as a Premier Diploma and Advanced National Goalkeeping Diploma from United Soccer Coaches.

What is the value that United Soccer Coaches has brought to your career as a coach?
They’ve given me a platform to learn first and foremost. As a young coach, the association gave me the opportunity to start my education from the very beginning, guiding me through the basics of coaching in an environment that I felt very comfortable in. Up to now where I was able to take the Premier Diploma, in a different environment where I felt challenged and came out the other side a better coach. First and foremost, United Soccer Coaches has the best environment for learning, from the curriculum to the instructors. Everything is encouraging and definitely level specific. I also feel as though the courses provide a platform for networking as I’m still in contact with coaches from all areas of the sport, (boys, girls, club, college, professional etc.) and these relationships were fostered in the United Soccer Coaches environment so to this day we still challenge each other within the soccer realm, sending sessions or ideas, and then when we meet up we have this connection that we fostered at the courses. Along with that I know that I could contact any of my instructors from any course I took and they would be willing to help me, or just chat. Secondly, I was given the opportunity to be a part of a 30 Under 30 class which gave me access to multiple resources, from a seasoned mentor to just access to other up and coming coaches that I can bounce ideas off of.

What advice do you have for other young coaches looking to progress in their career?
I definitely advise them to at least take a couple of courses in the first few years of their coaching career. As a young coach you may only have access to people that you work with, and like me in the college atmosphere, that may only be 2 or 3 people that you work for. That means that although the ideas you have may be good, as you’ve inherited them from those 2 or 3 coaches, you’re limited in creating your own ideas because you just don’t have access to more information. Going to a course not only gives you access to the information at the course on certain topics, but the instructor and their beliefs, and then 20 to 40 other coaches who may have more or less experience than you. This gives you the ability to take bits and pieces from all those coaches, and help create your own philosophy, from the coaching topics themselves to creating a coaching presence on the field. Secondly, I would also try and get to the Convention if you can, again it’s just another platform for you to learn from going to the field sessions, classroom meetings, or simply meeting and talking with other coaches. All this interaction will give you things to pull from not only at the Convention but years afterward, so make sure you take good notes! And then, lastly, if you’re coaching as an assistant whether it be in college or club, or maybe if you’re not coaching at all and just trying to get into the profession I would suggest trying to either get your own team that you can be the head coach of or even coach individuals in your spare time. I found this to be the best way to really test out and improve your philosophies. In my career, I coached club all the way from u11 up to u18 and I’m definitely a better coach for it. As a young coach, this throws you into the fire a little bit where you are able to test out sessions you’ve seen or read, and help you to interpret and put those into reality. This type of education will definitely help you to be a better assistant to your head coach.

Why do you believe being an engaged member of the Women Coaches Advocacy Group is important?
Again, I believe that being involved in any type of group where you get to interact with other coaches is great. But specifically, being involved with the Women Coaches Advocacy Group is important because this environment is so specific to you. The coaches within the group have definitely gone through situations that you’re going through now, and on the off chance that they haven’t their experience will definitely help guide you through. Being in that environment I’ve realized that there may be certain issues that I’m going through that I felt alone in when in reality coaches are going through the same thing right now, or have been through it and can help you navigate. Also, it’s just an incredible way to meet very successful women in the field that want nothing more than to see you successful, and coaches that want to help educate you and get you to where you want to be in the right way. I feel as though the women in that group are some of the most influential people in my field and all they want is to help me grow and become more successful than them, the empowerment of female coaches is definitely the number one goal.