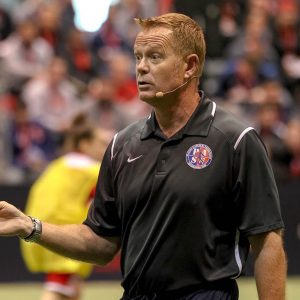 The Mike Berticelli Excellence in Coaching Education Award is named after the former United Soccer Coaches Director of Coaching and Vice President of Education. The award is presented each year in memory of the former Notre Dame coach, who passed away in January 2000, to a member of the United Soccer Coaches Academy Staff in recognition of positive contributions to the game of soccer and excellence in educating coaches.

“I am delighted to see Neil Hull be honored with the Berticelli Award,” said United Soccer Coaches Director of Coaching Education Ian Barker. “Neil has been a great colleague and friend to me. He was there for United Soccer Coaches Education when I was settling in to the position of Director of Coaching Education in 2012 and has been there for all of our national initiatives, and specifically those in Texas ever since. He is a great educator and leader and equally he is willing to facilitate and support when called upon. He is dedicated and professional with his colleagues and, most importantly, with the coaches we seek to serve. Neil’s honor is well deserved.”

Hull is a United Soccer Coaches National Academy Staff and National Goalkeeping Academy Staff Coach in addition to being the State Director of Texas, and a 30 Under 30 Program mentor. Since taking over as State Director of Texas he has educated nearly 7,000 coaches in his home state and nationally. He was named the 2010 Associate Staff Coach of the Year, was the 2016 Regional Youth Coach of the Year, and a four-time State Coach of the Year. He has been a regular presenter at the annual United Soccer Coaches Convention as well as at the Texas Association of High School Coaches (TASCO) Convention.

He is the Director of Player Development for Player’s Academy of Soccer Skills (PASS) in San Antonio and a professor in Coaching Education in the Department of Kinesiology at the University of Texas – San Antonio. Additionally, Hull has worked with the UTSA women’s soccer team as a Performance and Sports Psychology coach since 2017.