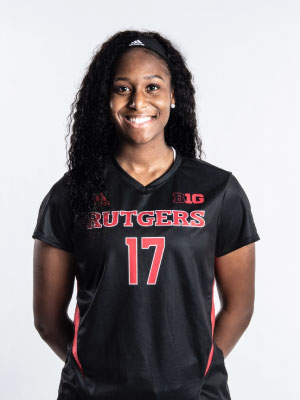 RutgersSenior | ForwardAmirah Ali, a two-time All-American and four-time All-Big Ten honoree, picked up her third First Team all-conference nod this season. The two-time MAC Hermann Trophy candidate and 2021 Senior CLASS Award finalist leads the team with 15 points (7g, 1a). Of Ali’s team-high seven goals, four are game winners, including one in overtime to extend her program record to nine career golden goals.
The two-time team captain was named to the 2020-21 Big Ten All-Tournament team, having helped lift RU to the semifinals for the second straight season and fourth time overall since joining the league in 2014. Her efforts on the field also pushed RU to its ninth straight NCAA Tournament this season, marking the 11th in the last 13 years and 15th overall. Ali scored the game-winner in the 1-0 victory over Southeastern Louisiana in the First Round, advancing RU to the Second Round for the first time since 2017.

The 2017 Big Ten Freshman of the Year has started 76 of 77 games since her arrival “On the Banks” in 2017, tallying a total of 77 career points (32g, 13a). Ali’s name is etched across the Rutgers career and single-season charts. The Voorhees, New Jersey, native ranks fifth in career points (77), fifth in career goals (32), and fourth in career game winning goals (14). Majoring in criminal justice, Ali is an Academic All-Big Ten recipient, receiving the honor this Fall 2020. 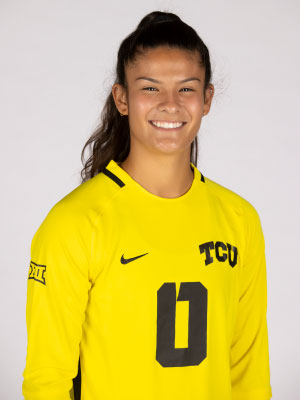 TCUSenior | GoalkeeperAlvarado has started 13 of TCU’s 14 games this season and owns a 12-0-1 record this season. She played the entirety of TCU’s run to the Big 12 regular season championships and was named the Big 12 Goalkeeper of the Year. The seniors has posted eight shutouts and assisted on another. She has allowed just six goals on the year, boasts a 0.98 GAAA and a .808 save percentage. 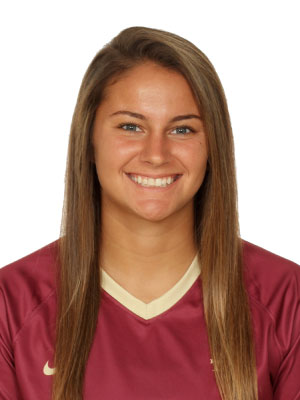 Florida StateSenior | DefenderPlayed in all 990 minutes of the 11 game season in the fall as the Seminoles’ starting center back. Named the ACC Defensive Player of Year, becoming the first player in ACC history to win back-to-back Player of the Year honors. She was named to the All-ACC First Team and the ACC All-Tournament Team. She was a part of a defensive backline that limited Florida State’s opponents to just 48 shots in 11 games with 29 of those 48 shots on goal. The Seminoles allowed six goals through 11 games with eight shutouts. Did not participate in the Spring 2021 season. 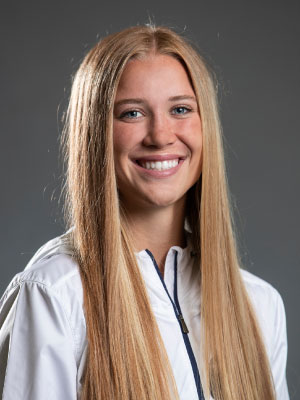 BYUSenior | MidfielderColohan has continued to dominate in the midfield this season, while being named the West Coast Conference Player of the Year for consecutive years and to the WCC First Team. Colohan has managed to score 11 goals, leading the WCC, including two game-winners. The All-American also added five assists for a conference-best 27 points on the season. The Kaysville, Utah native leads the WCC with a total of 69 shots and 34 shots on goal. Colohan was also perfect on four of four PK’s this season. During the season, Colohan went on a nine-game-scoring streak, tying the BYU record with Shauna Rohbock in 1996-97 for the most consecutive games with a goal.
Colohan now has 35 goals in her career, putting her ninth all-time on BYU’s career scoring list. She has 24 assists. Colohan was drafted by the Orlando Pride with the 14th overall pick in the 2021 NWSL Draft. In 2019, Colohan was named a Hermann Trophy semifinalist. 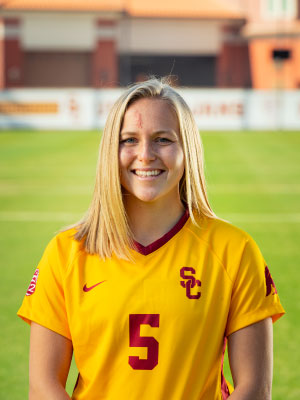 Southern CaliforniaJunior | Forward Hocking earned Pac-12 Forward of the Year and All-Pac-12 first team honors during the 2020-21 season. Hocking’s 10 goals led the Pac-12 and were 12th in the nation during the regular season. Her 23 total points (10 goals, 3 assists) also led the conference and her three game-winning goals were the fifth most in the Pac-12. She posted two multi-goal games this year, and had at least a point in eight of USC’s 13 regular-season games.

Hocking continued her steady climb up the USC career scoring list this year, becoming just the second Trojan to ever reach the 40 goal plateau when she netted a hat trick against Washington on April 2nd. The junior forward currently sits at 42 career goals, sitting second behind USC’s all-time leader Isabelle Harvey (48 goals). Her 100 career points are third on the Trojans’ all-time list and her 13 game-winning goals are second. 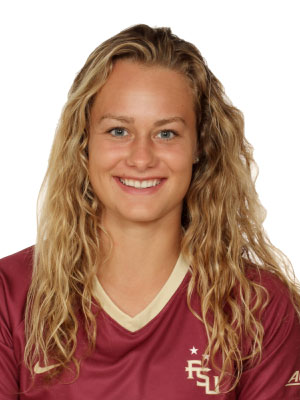 Florida StateJunior | Midfielder Started all 11 games for the Seminoles in the fall of 2020 and played a total of 965 minutes. She was named to the All-ACC First team, the ACC Midfielder of the year and to the ACC All-Tournament Team. She helped anchor a Florida State defense that allowed only 29 shots on goal and six goals in 11 games. She recorded four goals and two assists. Howell was also named the Sportswoman of Colorado (Outstanding Achievement in Soccer). Made two appearances for USWNT. Played 11 minutes against the Netherland on November 27, 2020 and 28 minutes against Argentina on February 24, 2021. 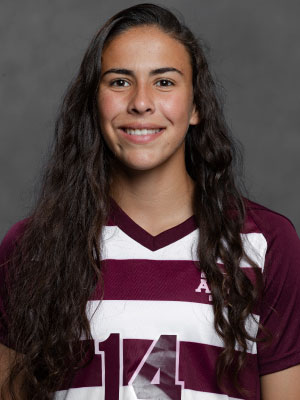 Texas A&MSenior | DefenderLopez was named 2020 SEC Co-Defender of the Year after earning SEC Midfielder of the Year recognition in 2019. The two-time All-SEC First Team performer led the Aggies and ranked second in the SEC with four assists during conference play. The Mexico City native added three goals for 10 points from the backline in her 10 fall games. She anchored a backline registered a 0.80 goals-against average and racked up five shutouts in 10 games en route to an 8-2-0 record, including winning their third SEC title with a 7-1-0 league ledger Lopez’s career numbers included 59 points on 18 goals and 23 assists in 72 games. Lopez was drafted by OL Reign in the 2021 NWSL draft, but elect to sign with Spanish club SD Eibar. She made her professional debut in February. Did not participate in the Spring 2021 season. 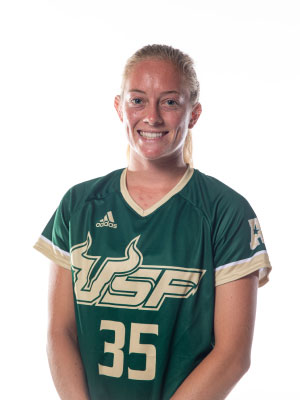 South FloridaJunior | ForwardIn 12 starts with the Bulls this season, Nasello led the team in scoring with 17 points on the season. Not only was she a goal scorer, finding the back of the net six times during the year, she also was a playmaker for others, tallying five assists on the year. As of April 28, Nasello ranked 10th in the country with four game-winning goals and 14th with 2.27 shots on goal per game. After earning AAC Offensive Player of the Week honors three times during the season, the junior was named the American Athletic Conference Offensive Player of the Year and earned first team All-American Athletic Conference honors. After scoring a brace against Cincinnati in the AAC Tournament Championship game, Nasello was honored as the tournament’s Most Outstanding Offensive Player. 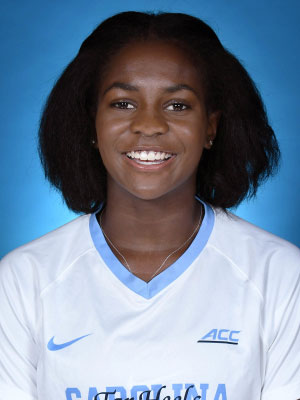 North CarolinaJunior | MidfielderFall: • First-team All-ACC selection for third-straight year • Started all 12 games of the 2020 season • played a total of 782 minutes • scored six goals in 12 games • ranked fourth nationally and second in the ACC for game winning goals, with three on the season • attempted 32 shots, including 19 shots on goal to accumulate a shots on goal percentage of 0.594 • scored against Wake Forest, Virginia Tech, Boston College, Notre Dame, Virginia Tech, and in the ACC Championship against Florida State.

Spring: Recorded a hat trick against Tennessee, currently ranks fourth in the country in total goals (13) and 17th in points per game (1.94) , ended the season scoring goals in five-straight games, including three at Tennessee and two against Columbus state.

ArkansasSophomore | ForwardAfter being named the first SEC Freshman of the Year in 2019 in school history, Podojil became the program’s first SEC Forward of the Year in the fall… Also named First Team All-SEC for the second consecutive season… Podojil was named the United Soccer Coaches and TopDrawerSoccer.com National POTW on September 29th… The Cincinnati, Ohio native was named the SEC Offensive Player of the Week on Sept. 28th and twice named to the TopDrawerSoccer.com Team of the Week… Her 24 points rank second in the conference, and tied for fifth nationally with 10 assists… Podojil’s seven goals are second on the team and she’s put together two braces. 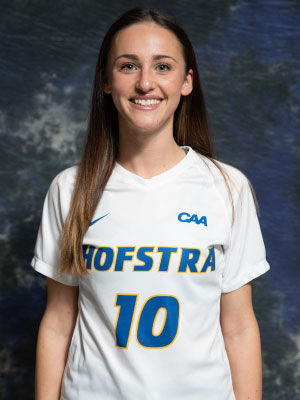 HofstraSenior | MidfielderPorter had another tremendous season for the Hofstra women’s soccer team. For the second-straight year, Porter was named the Colonial Athletic Association Midfielder of the Year while also collecting All-CAA First Team accolades for the third-straight season. She led Hofstra with 10 goals in the one-of-a-kind spring season and also added four assists, finishing with 24 points, an average of 2.6 points per game. Porter led a relentless Hofstra attack that currently ranks first in the nation in goals per game (3.56) and first in points per game (11.22). Individually, Porter ranks fourth in all of NCAA Division I in both goals per game (1.11) and points per game (2.67). For her incredible efforts, Porter was tabbed the 11th best player in the nation according to Top Drawer Soccer’s mid-season Top-100. 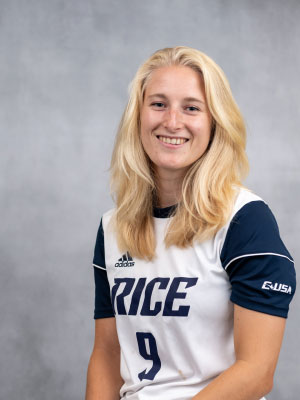 RiceSenior | DefenderConference USA Tournament Defensive MVP; C-USA Defensive Player of the Year; C-USA All-Academic Soccer Team (second team); Veteran defender who has brought a wealth of international playing experience to Rice… Starter for all 16 games this season, amassing a streak of 35-straight starts dating back to her first year with the program in the fall of 2019 (when she transferred to Rice from Boston College)… Rarely comes off the field, playing 1,434 of the team’s 1,477 minutes this season (98.1 percent of the team’s total playing time)… Anchors a young Rice backline where her experience and leadership have helped limit opposing teams to an austere 11.7 shots per game and been a catalyst behind the squad’s ten shutouts… Selected as the C-USA Defensive Player of the Year on a vote of the league’s 16 head coaches (and consider that by rule Rice head coach Brian Lee was prohibited from voting for his own nominee in the annual postseason poll)… The top defender in the conference has also come forward to provide an attacking presence for the No. 22 ranked Owls, recording three goals on 11 shots for a .273 shot-percentage… Scored the game-tying goal in the 3-2 upset victory against nationally-ranked Texas A&M… Recorded goals against C-USA foes North Texas and Old Dominion… Maintained a .455 shots-on-goal percentage… Recorded three assists for a total of eight points… Tied for fifth on the team in points. 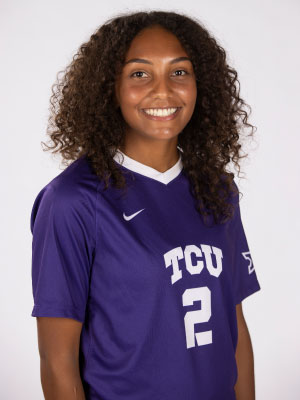 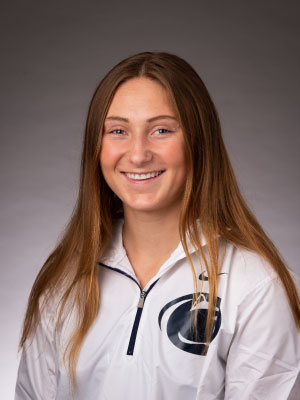 Penn StateSophomore | ForwardCurrent Stats (As of April 30) – 11 Goals, 6 Assists, 28 Points, 3 Game-Winning Goals
Schlegel followed up her impressive freshman season, which she was named Big Ten Freshman of the Year, with an equally impressive sophomore campaign in the spring of 2021. Schlegel led the league in goals for the second-straight season with 11 and led the Big Ten in points with 27 at the end of the regular season. She was also tied for the league lead with 3 game-winning goals. Schlegel’s 11 goals are tied for seventh in the NCAA, her 28 points are eighth and her six assists are tied for 37th.
Schlegel is the most recent Nittany to earn Big Ten Forward of the Year since Maya Hayes won the award in 2011 and 2012. She was also named Big Ten Player of the Week once. 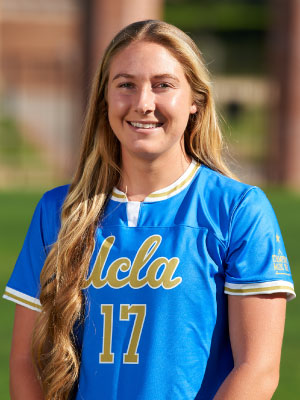 UCLASenior | MidfielderA finalist for the Senior CLASS Award, Delanie Sheehan was named the 2020-21 Pac-12 Midfielder of the Year and earned first-team All-Pac-12 honors. Sheehan has started and played in 15 games and ranks second on the team with five assists and tied for fourth with four goals and 13 points. Twice named to the Top Drawer Soccer Team of the Week, she scored the game-winner in overtime and assisted on the game-tying goal at Stanford and also scored the game-winner in a 1-0 win at Colorado. After playing the last two seasons as a defender, Sheehan moved back to midfield and has thrived as the Bruins’ 10.