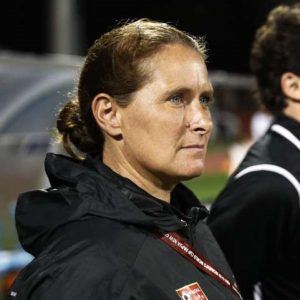 In her role as Head of Women’s Football Development, Cole has already attended the CONCACAF U-14 Girls Development Tournament in St. Kitts and Nevis and the U-17 FIFA Women’s World Cup Qualifiers on Grand Cayman Island in August. Over the last three weeks, Cole has been leading the Senior Women’s National Team as they prepare to head to Trinidad & Tobago from Sept. 30-Oct. 9. While in Trinidad & Tobago, the team will compete against the hosts as well as Dominica, Aruba, and St. Kitts and Nevis. The top finisher in the group will move on to the second round of Olympic Qualification.

“I am thrilled about the opportunity to help Antigua and Barbuda develop their women’s football ahead of the next Women’s World Cup cycle,” Cole said. “The expansion of the Women’s World Cup Finals to 32 teams presents a fantastic opportunity for those member associations who are willing to make the long-term investment and the ABFA is doing just that. They are committed to providing consistent training opportunities for senior team players, establishing a women’s football league, and developing a youth pipeline.”